The RTNN hosted 11 educators this summer from Durham, Johnston, Wake, and Chatham Counties. The educators worked in small teams in research labs at NC State, Duke, and UNC as well as a start-up company, Smart Material Solutions. During their time in the program, educators were exposed to and participated in research in cutting-edge laboratories. They also had the opportunity to utilize multiple nanotechnology techniques and tools in RTNN facilities including atomic layer deposition, photolithography, scanning electron microscopy, and atomic force microscopy. Projects ranged from the creation and analysis of thin films to the development of new filter materials. Educators also wrote innovative lesson plans linked to their research to bring back to their home institutions. The program culminated in a poster session where teachers shared their summer work and how they will use their experiences in their classroom.

For more information about the RTNN’s RET Site, Atomic Scale Design and Engineering, visit the program website. Information and application instructions for next year’s program will be available in early 2020.

Malvern PANalytical and the RTNN hosted a “Non-ambient X-ray Diffraction (XRD)” workshop at NC State November 8-9. The event brought together 48 attendees from 17 different universities and organizations to explore the research potential of non-ambient diffraction and practical advice for collecting accurate and useful data. On the evening of November 8, attendees learned more about on-going research during a poster session.

On November 10, the Carolina Science Symposium (CSS) was held at NC State’s McKimmon Center. This event brought together over one hundred people from universities, non-profits, and industry. Attendees learned about ongoing work in diverse scientific disciplines in a series of talks and a student poster session. Dr. Yong Zhang from the Electrical and Computer Engineering Department at the University of North Carolina at Charlotte opened the symposium. He discussed his work in light effect transistors for high speed and low energy switching. Dr. Jacqueline Cole (UNC/NC State Joint Department of Biomedical Engineering) highlighted her research in the role of vascular structure and perfusion in bone mechanics and health. Ian Haehnlein from Starfire Industries described the technique of high power impulse magnetron sputtering and its capabilities. Dr. Michael Daniele (NC State Department of Electrical and Computer Engineering) talked about his work in wearable biosensors and bioelectronic systems. These invited speakers were joined by students from across North Carolina: Islam Sayed (NC State), Michael Dryzer (Elon University), Ryan Fox (UNC), and Manish Sharma (North Carolina A&T State University). 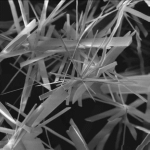 This annual event occurs each November. If you are interested in learning more or hearing about upcoming events, please contact rtnanonetwork@ncsu.edu.